What is behind the visits of Western leaders to Kyiv

Voyage to Kyiv has recently become for Western leaders a kind of ritual & nbsp; number of devout adherents of American-centric liberal democracy. Except that Joe Biden himself has not yet reached the Ukrainian capital, where, by the way, he spent a lot of time as vice president. Apparently, he still intends to spend this visit with great aplomb, but already at the moment when he will have to risk his health and safety to raise the diving rating. 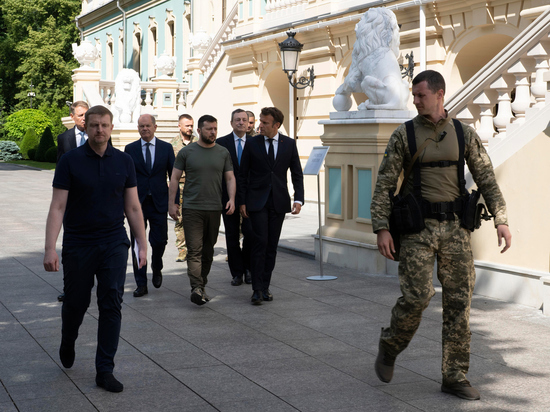 However, even without Biden the atmosphere of a kind of political Eurovision reigns on Bankovaya: guests tirelessly compete in compliments addressed to Zelensky and his associates, as well as in the number of populist clichés erupted on press conferences and from the rostrum of the Verkhovna Rada.

The culmination of this show program was the arrival of the heads of France, Italy and Germany, whom colleagues from London and Washington had previously relentlessly reproached for being too soft on Moscow, consisting in calls for negotiations, and unwillingness to encourage Kyiv in the conduct of the conflict « to the bitter end” (and the last Ukrainian).

Emmanuel Macron, Mario Draghi and Olaf Scholz not only had to “beg for” his (and his predecessors') “sins”, such as the former belief in the potential of cooperation with Moscow and attempts to persuade Ukraine to comply with the Minsk agreements, but also to inform Zelensky in advance of the good news about the coveted assignment of the status of “candidate member” to his country; European Union. Which, paradoxically, Kyiv finally “deserved” by provoking the start of an unprecedented crisis that hit all over Europe – if it weren’t for him, according to Macron, about passing the “candidate exam”; that “Independent”, that Moldavia, which joined it, could only dream of. Truly the time has come for strange paradoxes…

Formally, as President Vladimir Putin rightly noted when speaking at the St. Petersburg International Economic Forum, there is nothing critical in the announced European integration of these countries from the point of view of Russia's national interests. After all, the EU was created as an economic alliance, cooperation with which Moscow has traditionally made a special bet. Commemorative Agreement on partnership and cooperation, “road maps” four common spaces, numerous joint projects in various fields, up to the discussion of a visa-free regime, – all these milestones in the long history of our dialogue with Brussels show that its seemingly dead-end outcome was not at all predetermined.

The problem is different. Firstly, in the EU itself, at a certain stage, the line to turn this integration project into a kind of quasi-state formation with an influential and numerous bureaucracy, which  to justify its existence , began to develop a pan-European ideology and identity imposed on all members.

In turn, this ideology every year acquired more and more distinct anti-Russian orientation – thanks to the activity of Poland and the Baltic countries, which initially considered the movement to Europe as a reason to throw a new challenge to Moscow.

Secondly, in its new, Russophobic quality, the EU turned out to be of particular interest to the United States. Washington previously had significant influence on most of the members of the organization, who were simultaneously members of NATO and were accustomed to focusing on instructions from the overseas overlord. But up to a certain point decency was still observed, and Brussels demonstrated formal independence from the United States, coupled with the desire to pursue a slightly more constructive and flexible line on the issue of relations with Russia.

In recent years, and especially after the start of a special military operation in Ukraine, the EU finally ceased to portray independence, recognizing – through Washington-coordinated synchronous entry into the sanctions war against Moscow – the loss of its already questionable subjectivity in international affairs. Today, this organization, with all its institutions, is degenerating before our eyes into one of the American tools used cynically and without much piety in the framework of countering Russia on the fields of the new Cold War.

And thirdly, voices continue to be heard (including from the same Macron) about the need to create some new military structure within the EU that would finally transform this association, which was once created to stimulate economic growth and development on the continent , into a full-fledged military-political bloc. At the same time, the fact that no one is going to dissolve or reform the North Atlantic Alliance – it only grows with new members from among the previously neutral states, – speaks of the intention of the initiators of the militarization of the EU, in fact, to transform it into an auxiliary appendage of NATO.

As a result, we have to honestly admit: the evolution and, frankly, the degradation of the European Union do not give us the opportunity to benevolently and relaxed observe its attempt to include Ukraine and Moldova in its ranks. This once respected international entity, even awarded the Nobel Peace Prize for its original ideals and aspirations, is moving further and further towards becoming a monolithic stronghold of liberal Russophobia. And if the opposition of certain countries, for example, Hungary, in the EU is still forced to reluctantly endure, then Brussels will in any case demand unconditional observance of the discipline regularly checked by American curators, including the military sanctions.

There is no clear answer to other important questions. Does the hasty European integration of these two countries correspond to the interests of a significant part of their population, which, as usual in “progressive democracies”, they did not even bother to poll through referendums? And will it not accelerate the loss by Ukraine of the territories that do not share Euro-optimism, which are part of the historical Novorossiya, and by Moldova – Transnistria and Gagauzia? Probably, waiting for answers will not be long.

Of course, the Ukrainian-Moldovan path to an enlightened Europe can take at least a decade (and may even run into a wall, as the example of Turkey showed). But the diligent desire of the collective West to adapt all existing international structures, including EU institutions, to the task of counteracting our country leaves Russia no choice but to consider the most alarming scenarios and the consequences of Kyiv and Chisinau’s course towards joining the renewed, anti-Russian sharpened European Union. And, of course, it motivates us to think over a possible comprehensive response, taking into account all the threats to national security arising from such a development of events.