Only through France 23,000 illegal immigrants broke through to England this year

Of course, the school did not prepare us all for electricians, but I remember how they carefully explained Ohm's law, backing up with laboratory works. As, sticking out our tongues, we wound the resistance of the rheostat and, squinting our eyes, watched the arrow of the ammeter. 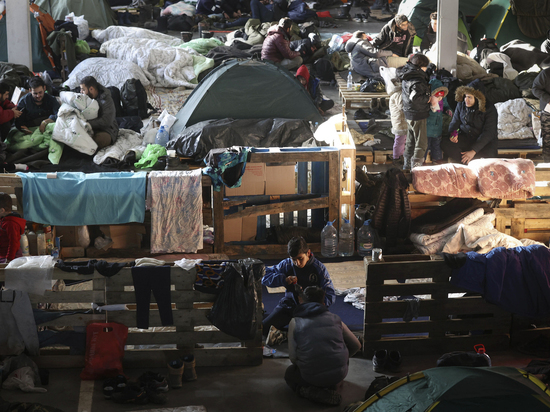 This fall, more than a billion interested people (Europe, the Middle East, Africa) who have left school age, against their will, found themselves in a similar “laboratory work”. We watched every flinch of the needle of the “ammeter” installed in Belarus, measured the currents of migrants to Poland and Lithuania.

It began with Lukashenka's unofficial hint: “We will not keep migrants!”, Continued with two quite official calls from Merkel, who de facto recognized the Belarusian president and asked for his assistance in resolving the crisis.

However, the significance of the events of autumn 2021 is much broader. ” problems of migrants ”: the crisis helped to measure the current currents in politics and public opinion in Europe. The first reaction of the Euro-media is reflexive, like the twitching of a frog's leg (again – a current!): “Lukashenka and Putin arranged it.”

Equally reflexive is the avoidance of the simplest question: why did these two or three thousand migrants rush to the Belarus-EU border? “. The reason that attracts migrants to move from point A to point B is the difference in potentials, levels of security, material wealth at these points. It's even embarrassing to repeat this banality.

So, the first elementary logical step, a complete analogy with the cause of an electric current: the potential difference (voltage).

Step # 2. Was there before the destruction of Iraq-2003, the “Arab Spring-2011”, such a current (migrants)? No! The flow was within the limits not only bearable for Europe, it even met the needs of Europe for cheap labor.

Here we will deviate from a too simple analogy. An electron is equal to an electron, but is a migrant, say, 1998 equal to a migrant in 2018? The summaries of the terrorist attacks will be answered. The 2018 migrant is “much more radicalized.” Now the migrant is not a meek seeker of a better life, but a person “tormented by vague suspicions” – because of whom he felt worse.

And again, from individual individuals, let's return to flows, currents. As if some hopeless poor student began to play with two parameters: he increased the voltage, the potential difference (not so much an increase in prosperity in Europe, but its collapse in the Near and Middle East!), And played pranks with resistance. Destruction of Libya: a clear breakthrough in isolation and an increase in the mass of the humiliated and insulted by the size of its population.

Due to some long inertia in the thinking of the euro-country, playing with tension, they subconsciously believed that the periphery had no options to choose from, it would always keep impenetrable boundaries in both directions, simply because of its backwardness and condolence. “It is we, the free world, an open society – we are free to remove/erect fences, borders, and those who are not free by definition must sit on a leash at their border pillars. “To drag and not to let go” – that's all they can do! A breakdown, a “short circuit” is possible only on our initiative, albeit sometimes erroneous (Libya, Iraq, Syria …). ” they suddenly found out: international law does NOT oblige them to keep their “borders shut.” Turkey was the first to realize that those who committed it should pay for the enormous historical naivety, for this mistake. And they pay: 3 billion euros/year, plus a lot of political concessions.

Next Belarus? Far from it! The “backward” Lukashenko remained in the “soviet dope” for years. Better take a look at Morocco for now! The figures of their dielectric breakdown are incomparable with the Belarusian ones (which hints at the bias, dishonesty of the reproaches of Belarus). Over 10 months of 2018, more than 43,000 illegal migrants entered Spain. Morocco has received rents for overall stability, more than € 13 billion since 2007, and after opening its borders, it received the threat of termination of payments.

“Third countries – sources of migration flows or their transit – must understand that for us migration will be central in our partnership relations in the coming years,” said Vice President of the European Commission Margaritis Schinas in connection with the Morocco-Spain crisis.

Then, with the inaction of the Moroccan border guards, 8000 people crossed the border between Morocco and the Spanish enclave of Ceuta on May 17.

The EU budget for 2021-2027 also provides funds for assistance to countries bordering the EU, plus a fund of € 9.5 billion for emergencies. In addition to Morocco, splinters of Libya threaten to knock out aid. The flows of drugs can be added to migrant “shocks”.

In the absence of legal grounds, claims against Lukashenka and Russia are just a set of non-legal exclamations: “lets go, manipulates, controls, uses”.

Here is what The New York Times writes in the article “The West accuses Belarus of staging a migration crisis on the Polish border”: “Lukashenka lets thousands of refugees from the Middle East into his country, and then sends them westward, towards Poland and the EU. Poland is building up a grouping of forces in the area, more than 17,000 people.

Human rights organizations – Amnesty International, the Helsinki Foundation for Human Rights – accuse Poland of illegally expelling those migrants back to Belarus. who crossed the border. Recently, the Polish authorities passed a law to legalize such actions. The European Commission has started to study it. ”

Let's turn on the logic. What about a multiple of the number of illegal immigrants: 23,000 broke through to England alone this year ?!

Step 1: They are in France – Macron “let them in”? 2nd step. They reached, drove to Calais, also using French transport, road signs that Macron did not cut down, did not knock down – so he directed them?

And even if they find out that Lukashenka not only said: “We will not hold,” but also winked at the same time, it does not matter! The main thing is that somewhere in the attic he found reference books on international law, on the Anglo-Saxon foundation, and read there about the law of precedent. And he realized: even France this year let 23,000 migrants through itself to England! But who after that Boris Johnson, throwing a battalion to help the Poles in order to hold back the “ninth wave” of 2-3 thousand?

Now, if Belarus, like NATO, destroyed Libya, Syria, Iraq, it would be possible to point out its active role in the current crisis. And so, what does it turn out to be – a cunning “non-resistance to evil by violence”? Sanctions for Tolstoyism? Li-tse-me-ry – your “super task” is to tie Russia to this crisis and Russia is visible even from Pluto.

P.S. According to the Halifax/IPSOS Global Snapshot poll, the International Security Forum, of the world's 28 leading countries, Russians are in last place on the list of favorable attitudes towards NATO and the EU – 2%. Why would you?