“This is how American pilots are having fun”

NATO air activity over the Black Sea almost went sideways. Spy planes, which make reconnaissance flights near the Crimea, following their own course, known only to them, run ahead and do not pay attention to international air corridors for civilian liners. As a result, Russian air traffic controllers miraculously saved an A330 airbus flying from Tel Aviv to Moscow from a collision with a NATO CL600 reconnaissance aircraft. Experts told MK about the danger of such incidents. 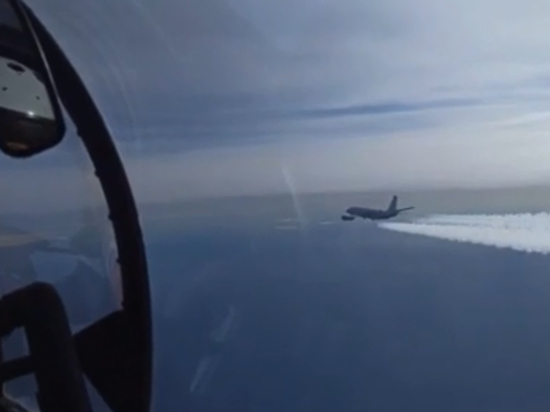 Civil aircraft on international routes do not move chaotically in the sky, but along established corridors, at certain heights (echelons) and above designated landmarks. This is done in order to exclude a collision of aircraft and ensure the continuity of communication between the crews and ground control points. One control tower “leads” each aircraft in its area of ​​responsibility, and then transfers to another.

Unfortunately, this air traffic control system does fail. And then real tragedies are played out in the sky. So, on August 24, 1981, in the sky over the Amur region near Zavitinsk, a passenger An-24RV and a Tu-16K missile carrier, performing weather reconnaissance, collided. 37 people were killed. An-24 passenger Larisa Savitskaya, who survived a fall from a height of 5220 meters, miraculously survived.

Another similar tragedy occurred on July 1, 2002 over Lake Constance. In the skies over Germany, near Überlingen and Lake Constance, a Tu-154M passenger airliner of Bashkir Airlines and a Boeing 757-200PF cargo plane of DHL airline collided. Killed 71 people, including 52 children, flying on a Russian plane.

That story had a dramatic continuation. For various reasons, dispatcher Peter Nielsen was unable to separate the planes in the sky and prevent the tragedy that day. Russian citizen Vitaly Kaloev, who lost his wife and two children in the crash, killed Peter Nielsen in Switzerland, inflicting 12 stab wounds on him. Kaloev was found guilty of murder and sentenced to 8 years in prison. After appeals, he was released early and returned to Russia.

On December 3, 2021, there was also a danger of an aircraft collision over the Black Sea. But it was avoided. Rosaviatsia on December 5 disclosed the details of the incident. It all happened on the morning of December 3, at 09:53 Moscow time. Close to the area of ​​responsibility of Russian air traffic services, the NATO CL600 reconnaissance aircraft unexpectedly began a sharp decline from an altitude of 11 thousand meters to 9.2 thousand meters. At the same time, he crossed the air corridor established for civil aircraft. The air hooligan did not respond to inquiries from the ground.

At the same time, civilian airliners passed through this area: the A330 aircraft of the Aeroflot company, flying from Tel Aviv to Moscow, and the Maltese CL650, en route from Sochi in Skopje (North Macedonia). There were 142 passengers on board the A330. According to the Federal Air Transport Agency, “the directions and flight levels of civil aircraft were promptly changed.” As a result, everything worked out.

However, the “sediment” from the behavior of the spy plane in the air remained. Rosaviatsia will initiate a protest through diplomatic channels in connection with a dangerous situation.

As the pilot with 40 years of experience, in the recent past, the crew commander Vladimir Salnikov, told MK, this happened in his flight biography. p>

– It was so. The Americans very often used all these abnormal techniques over Afghanistan. I flew the Il-96 then. The Americans had bases in Central Asia, and they came literally “under the belly” of civilian aircraft with their transponders turned off. And then, when they turned them on for ten seconds, as if indulging, immediately in our cockpit the command of the TCAS dangerous approach equipment sounded: “pull up” or, conversely, “descend”.

If I receive from TCAS command to change course, I have to carry it out. I begin to change course with a report to the ground dispatcher, but over Afghanistan the connection was poor, that is, you can't get the word out right the first time. And the Americans had fun because of it. The same thing happened in other areas.

– At the air traffic control points, there are civilian dispatchers and nearby – the military, who use the data of their locators. The information is mutual. When an abnormal situation, as in this case, work together.

The only question here is for the scout crew: why do all these dangerous encounters? All the more unpredictable. Which cannot be predicted by other crews – to what height it will descend and what course it will take.

TCAS starts to fire 30 kilometers away. When the crew reports to the ground that a TCAS command has been issued to change the course and altitude, the dispatcher's task also becomes more complicated: he needs to notify all neighboring aircraft and separate. This creates great difficulties for pilots and air traffic controllers.

– Dispatch services did what they had to do. All civil aviation flights take place along international routes, corridors, and not just anywhere. In these corridors, flights are carried out under the supervision of ground control services.

That is, the dispatchers “lead” these planes so that they fly at the right altitude, with the right interval, in the right direction. There should be no other aircraft, let alone those not subordinate to air traffic control, on the route.

If suddenly some strange aircraft appears on this route, unidentified, such a kind of UFO, and even not responding to requests and not obeying the commands of the dispatchers, then he is a threat. Because no one knows how he will behave.

Considering that there is some kind of aircraft on the route, the dispatchers made the right decision: to take the planes to unplanned heights and routes in order to fly around the danger zone. The danger in the unpredictability of UFO behavior. There was no information about him, the crew did not answer.

– No special. You can complain to the International Civil Aviation Organization that reconnaissance aircraft operate flights that threaten the safety of civil aviation.